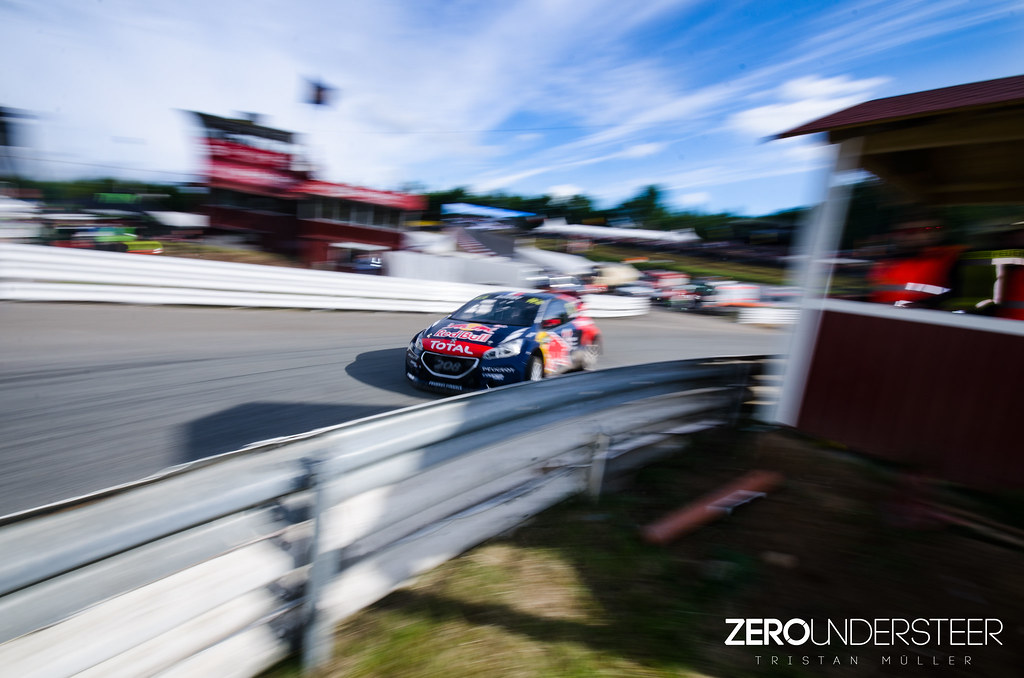 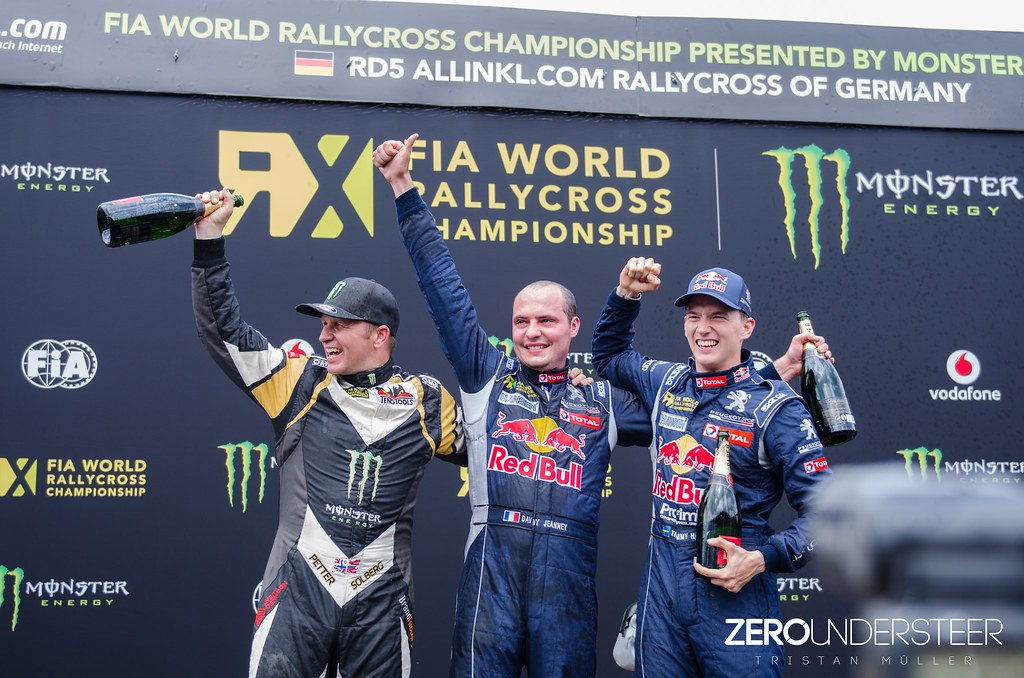 Davy Jeanny dominated the Rallycross Weekend in Germany by winning 3 of 4 heats of the Supercars and was the only one able to win over current WRX Champion and championship leader Petter Solberg.  With his 2nd place on the podium Petter Solberg extends his Championship lead over Johan Kristoffersson by 35 points.

Happy winner Davy Jeanney, who eternalised himself as the first Frenchman to win a Round of Word Rallycross Championship, stated after his victory:

“To win today feels incredible, it’s been the perfect weekend for me and it’s really fantastic for the team to have Timmy on the podium too.” 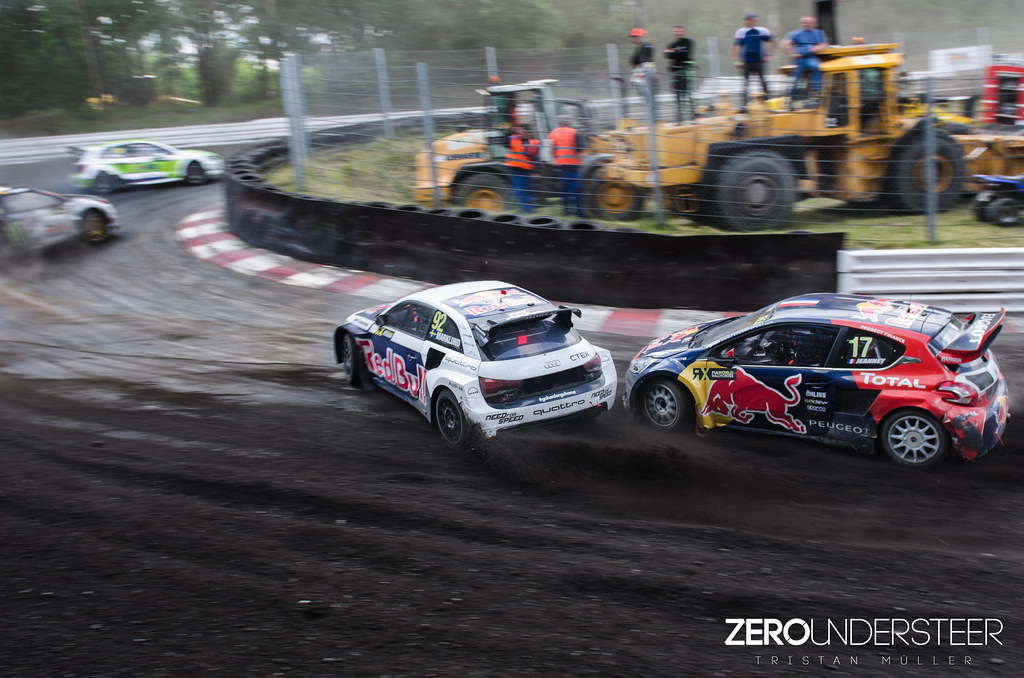 In the second round of Euro Rallycross Championship Marklund Motorsport’s Tommy Rustad finished first closely followed by Jérôme Grosset-Janin and fellow Frenchman Fabien Pallier. With his win Rustad closes the gap to Jérôme Grosset-Janin who won Round 1 of WRX up to only 2 points in the overall stanings. 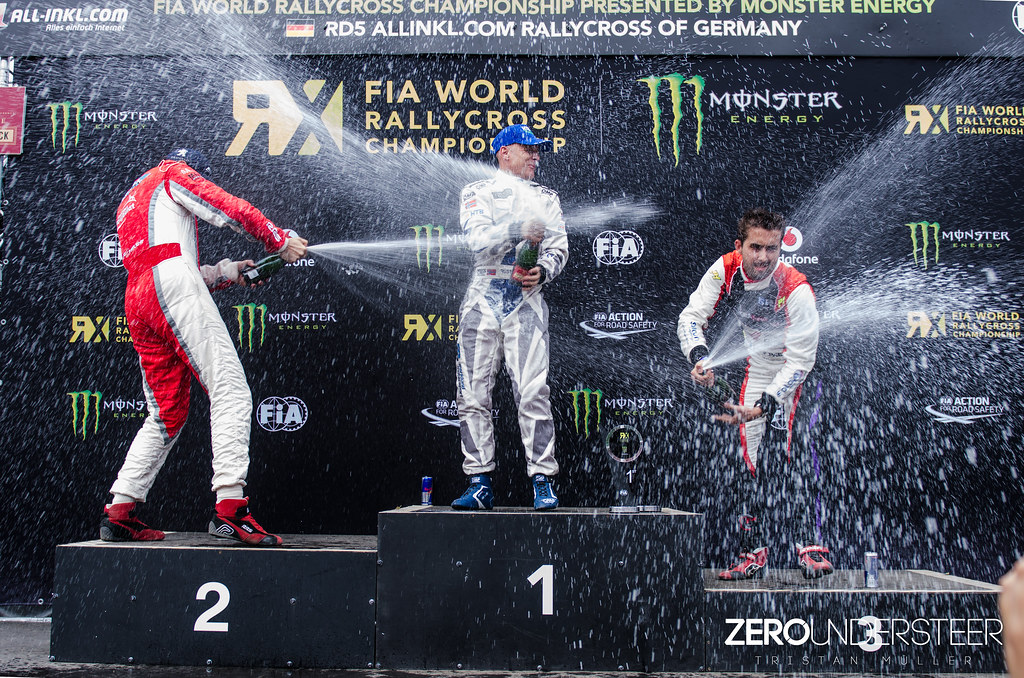 Runner-up Solberg was full of praise for Germany RX winner, Jeanney. “I must say, I am very impressed with Davy – he was unbelievably quick this weekend, he deserves this,” admitted the reigning World Championship. “Usually I always want to win,” continued Solberg, “but I’m very happy to take second. It’s good for the Championship and I tried really hard to fight for the top spot but it’s been very tough racing. For the next event in Holjes, I’ll come back pushing even harder.”

Timmy Hansen’s weekend didn’t get off to the best start when the Peugeot- Hansen driver encountered some technical problems during the heats. The Peugeot-Hansen team worked hard on the car overnight and Hansen returned on flying form today to secure the third step of the podium. “I really didn’t expect to finish third after yesterday but we came back fighting and in the final I thought to myself that it was all or nothing. I really pushed and when Johan [Kristoffersson] took the Joker on the final lap, I made the most of the opportunity to move ahead. Davy has done a brilliant job, I’ve been chasing him all day!”
Following another impressive drive in the Volkswagen Sweden Polo RX Supercar, Kristoffersson finished fourth in Germany. Fifth place was awarded to Marklund Motorsport’s Tord Linnerud after Ford Olsbergs MSE driver Andreas Bakkerud was excluded from today’s final following contact with Linnerud at turn one. 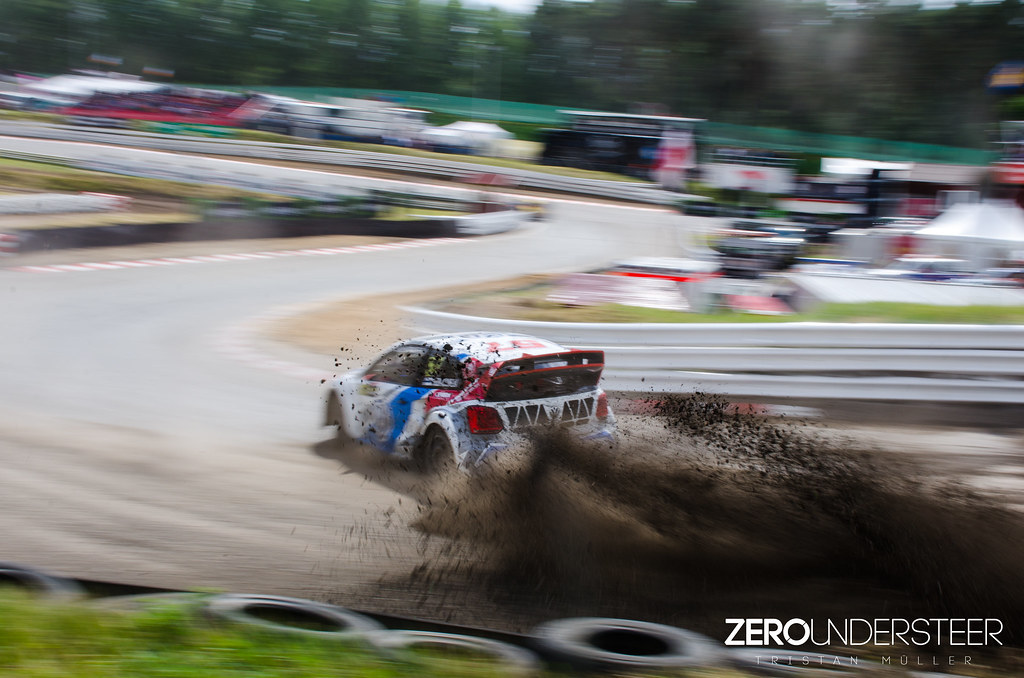 Elsewhere, it was a tough weekend for EKS team owner Mattias Ekstrom who failed to make the semi-finals after a broken throttle cable and a sensor problem hindered his progress. Team-mate Anton Marklund progressed to the semis but a tussle with Ford Olsbergs MSE Reinis Nitiss on turn one saw both drivers retire. 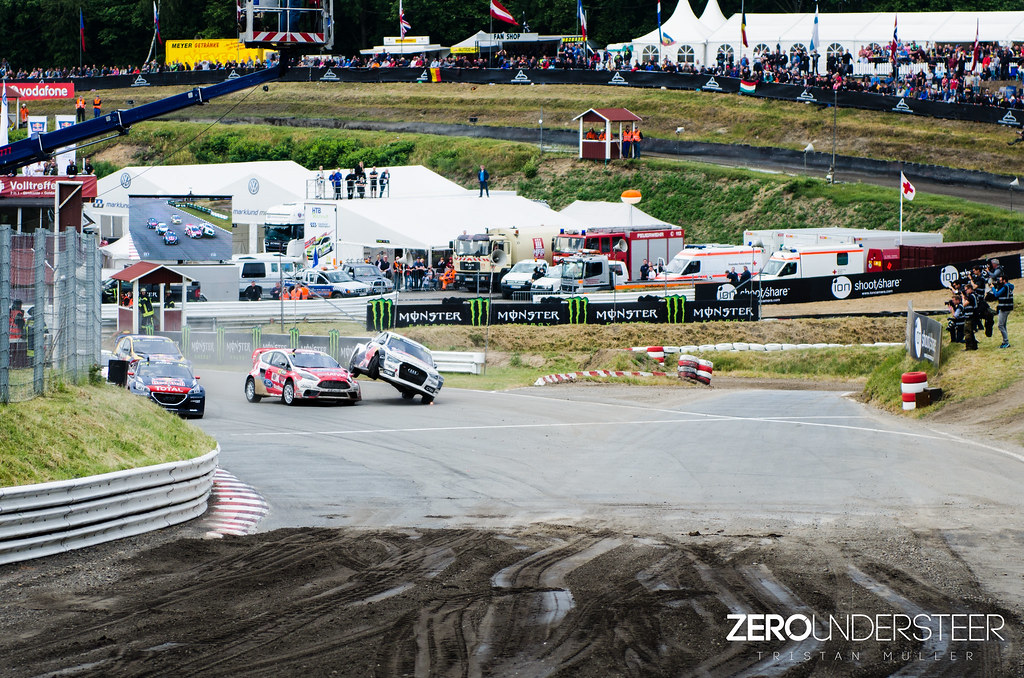 Swede Anton Marklund from EKSRX-Team got hit by OMSE driver Reinis Nitiss and had to retire. 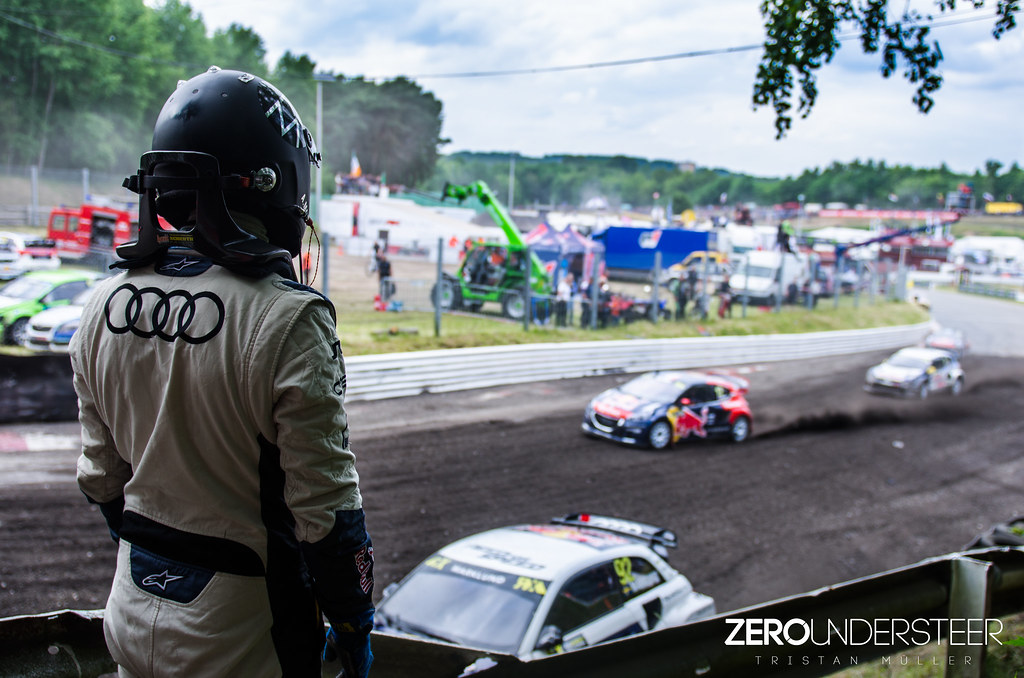 Anton Marklund from EKSRX watching the other drivers finishing the semi-final.

Fredrik Salsten won this weekend’s TouringCar category after the Swede took a narrow victory over 16-year-old Magda Andersson. Salsten’s win now sees him lead the overall standings. Third place was awarded to Kjetil Larsen. Andersson, who is the youngest female to secure a podium in TouringCars, commented: “Our goal was to reach the semi-finals at some stage this year but to make the final and to finish second is a dream come true.”
In S1600, Denmark’s Ulrik Linnemann took the win and is now third in the standings with Janis Baumanis at the top of the table. Russia’s Timur Shigabutidnov and Hungary’s Krisztian Szabo were second and third respectively. 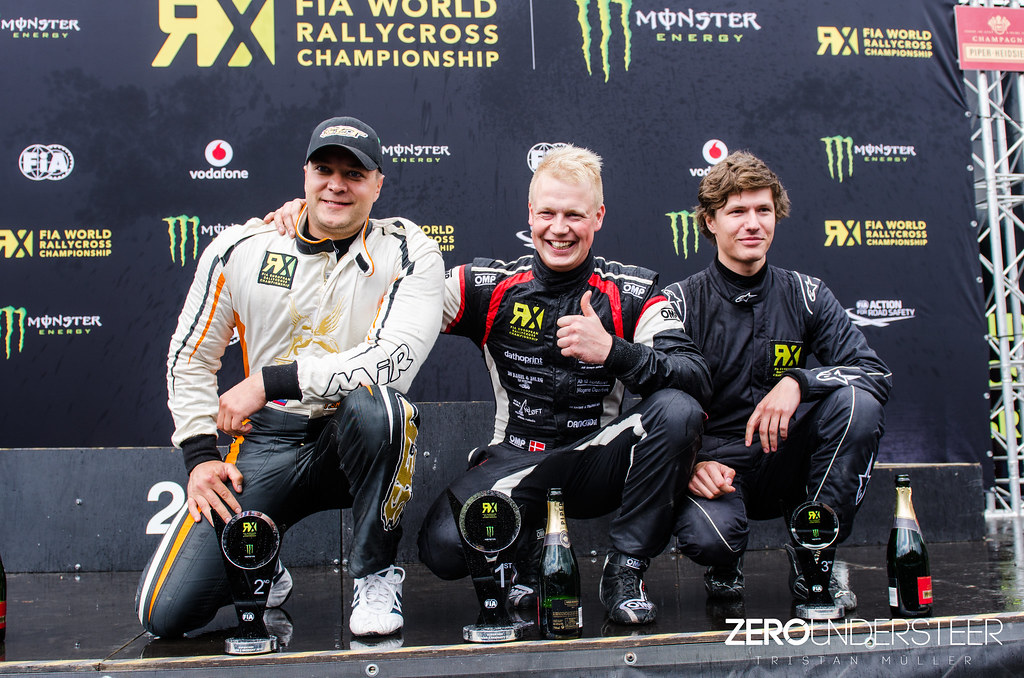 Martin Anayi, World RX Managing Director for IMG Motorsport, concluded: “It was excellent to watch Davy win in Germany and to become our fourth different winner in five races. Team Peugeot-Hansen have worked incredibly hard this season, both on and off-event, and deserve the double podium after their efforts. They have also closed the gap in the Teams’ Championship and it is exciting to see just nine points separating current leaders Ford Olsbergs MSE, SDRX and Peugeot-Hansen as the Championships nears its half-way point. Congratulations also to Tommy Rustad who took the Euro RX win and regularly challenged the World Championship drivers throughout the heat races. With only two points separating Tommy and Jerome in the European Championship, it’s going to be all to play for when Euro RX resumes at our Norwegian race at the end of August. I’d also like to take this opportunity to thank the German organisers for working on some key improvements to this year’s paddock and the track, it’s definitely paid off and made the Estering a fantastic event for both drivers and the fans.”

The World RX crews will now have a week’s break before the Championship resumes in Sweden for the iconic Holjes event (3-5 July).